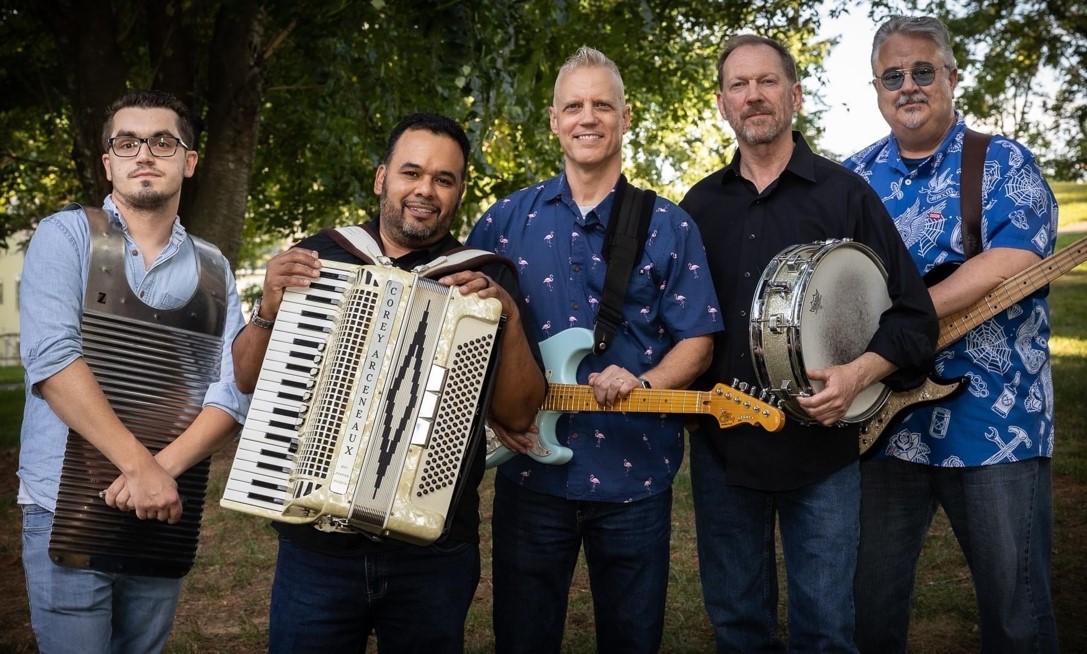 Corey Arceneaux is a Louisiana born and bred zydeco accordionist and band leader. He learned the accordion at a young age and formed his first band while still in high school. His great-uncles, musicians Rodney Bernard and the legendary Fernest Arceneaux, were his inspirations. As he found his style, Clifton Chenier and Stanley “Buckwheat” Dural, Jr. became his favorites, and Buckwheat also became a mentor and friend.

Corey and the Zydeco Hot Peppers performed internationally and domestically – wowing dignitaries and crowds at special events, festivals, clubs and Mardi Gras balls through the years. They also recorded five studio albums. Simultaneously, Corey has been a radio DJ for about 30 years, which has allowed him to promote Zydeco and the Creole culture of Southwest Louisiana to a larger audience. Currently, he hosts “Hot Sauce Saturday” on KFXZ/Z105.9 FM/www.z1059.com on Saturdays from 9 a.m. to 2 p.m. Central time.

After moving to Virginia, Corey connected with area musicians with experience in and a passion for Zydeco music. They jammed, and everything came together like a pot of gumbo. The talented Zydeco Hot Peppers are Ben Holmes (drummer), Doug Bell (guitar), Gene Monroe (bass) and Pat Clark (scubboard/frottoir).

Ben Holmes started playing Zydeco in the 1980s. He’s toured and recorded with Al Rapone and the Zydeco Express and the Grammy-winning Queen Ida and the Bon Temps Zydeco band. He’s taken Zydeco on the road from Australia to Africa. Ben plays various genres, but he has a genuine love for Louisiana music styles.Since 1995, Ben has played with DC favorites, such as The Hula Monsters, King Soul, Zydeco Crayz, Savoir Faire Cajun Band, The Canecutters, Canebrake Cajun Band and The Longtimers.

Doug Bell is a veteran musician in the DC area and has performed across the eastern U.S. for nearly 25 years. He has played in bands such as Zydeco Crayz, The Louisiana Sugar Kings, Charlie Sayles and Union Mission Blues, Savoir Faire Cajun Band and Canebreak Cajun Band. His passion is for authentic southern American roots music, especially the dance styles of south Louisiana.

Gene Monroe comes from a musical family and has been a working bassist for the past 30 years. He has performed with artists such as Billy Thompson, King Soul, The Grandsons, Skyla Burrell, Daryl Davis, Shrimp City Slim, Little Bit A’ Blues, Mike Westcott, J.B. Beverley, Deane Kern and Hard Swimming Fish, to name just a few. He has played well-known clubs and festivals both in the DC region and up and down the Atlantic Coast, Memphis, Chicago, San Diego and Japan.

Pat Clark is a professional drummer, guitarist, and private music teacher from Silver Spring, Maryland. As a kid, he went to New Orleans, Louisiana every year for Jazz Fest so Zydeco is in his bones. Pat has been influenced from artists such as Taylor Swift, Dashboard Confessional, Stanton Moore and Los Lobos.