Anthony Rosano and the Conqueroos 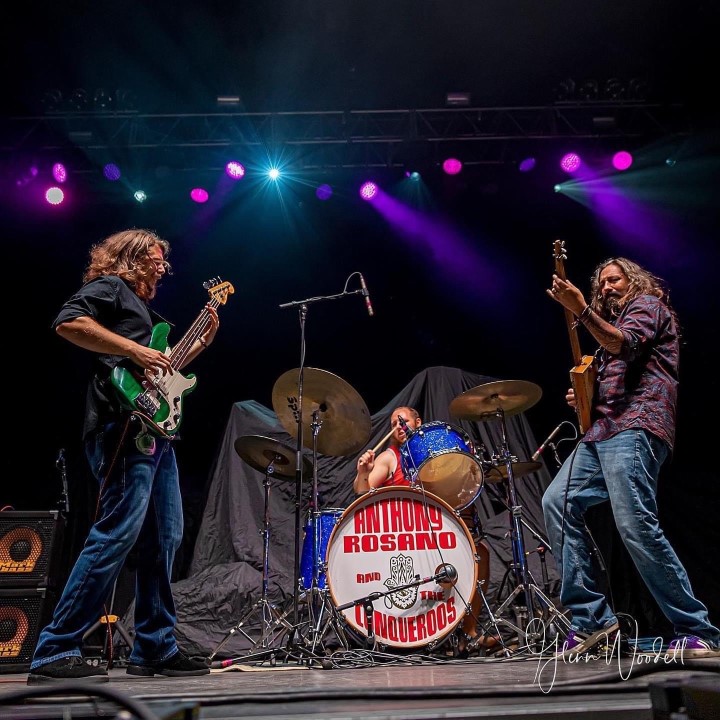 Come celebrate the New Year with one of the best bands in the area! Anthony Rosano and the Conqueroos will rock us into 2023 at Flat Iron Crossroads. Tickets include music, dancing, heavy hor d’oeuvres and champagne toast at midnight. Tickets are limited, so purchase yours today.

The Billboard and iTunes Chart toping Blues Rocker Anthony Rosano has drawn comparisons to a wide variety of Artists. From SRV and Rory Gallagher to Led Zeppelin and Bruce Springsteen, with a fiery live show and songwriting depth that is refreshing to fans of American Blues Rock.

Rosano’s 2017 self released record “Anthony Rosano and the Conqueroos” debuted at #9 on Billboard and made #1 on the iTunes blues chart, dethroning The Rolling Stones. The record was produced by Mike Zito and featured guest performances by Zito, Anders Osborne, and Johnny Sansone. Extensive touring and live shows followed, culminating in 2019 With Rosano and his “Conqueroos” joining the legendary Bob Seger for a string of opening shows across the eastern United States and Canada.

“I want to be an on ramp to the Blues.” Drawing from his influences Rosano mixes traditional Blues and Roots elements with a modern Rock delivery. “You see all sorts of music fans at the shows, from Blues Aficionados to long hairs with Metallica T-shirts. If I can get that dude in a Metallica shirt to listen to Muddy Waters, I feel like I am working off a debt to the genre.” This Diversity in appeal has led to slots at LOCKN, Western Maryland Blues Fest, and Madison Square Garden. Opening for artists like Samantha Fish and Tab Benoit to Bob Seger , ZZ Top, and Gov’t Mule.

During the 2020 lockdown Anthony continued to live stream acoustic shows to his fans through Facebook. “I did it at first just to stay sane, performing live is something I NEED to do… It’s part of my makeup. I hoped it would help others get some sort of comfort and forget about what was going on for a little bit.” The streams were a success and one of the new songs “Isolation Blues” ended up being used by NPR for “Voice of America”. Other songs followed and along with a new trio, an EP is in the works for 2021. “I’m really digging the Power Trio format” says Rosano, “These guys are great to play with and the live shows have been straight FIRE!”